KUST Family celebrated, “Yalda,” an Aramaic-Syriac word which means birth was incorporated into the Aryan language. A celebration of the Winter Solstice according to the Kurdish solar calendar which this year falls on Thursday, Dec. 20, considered the shortest day of the year.

The event started with a brief introductory about Yalda through history. Later a short documentary about Yalda Celebration in Iran was shown to the audience. Dr. Zanyar Faiq Saeed, Chairman of English Department enriched the event with reading Kurdish Poems by Khayyam, Nali and Mahwi, in a very beautiful literary way. Lastly Persian Hafez Poems was (as usual, one of the other traditions of Yalda night, which has been added in recent centuries, is the recitation of the classic poetry of Hafez, the Iranian poet of 14th century AD) read by Ms. Arezou Vaske.

The event from starting and on was covered with live Kurdish traditional music by along with our beloved student, Ahmed Abbas and Salar’s Group (Ms. Soma and Mr. Srusht), they are entitled by the Director Ms. Vaske as music lecturers for Komar Professional Development Institute.

On that graceful night, which falls on the last day of Sarmawarz (the last month of autumn in the Kurdish calendar year), the winter chill is vanquished and the warmth of love embraces the entire family. Hearts move closer to one another in the company of loved ones on Yalda.

According to UNESCO, Yadla ceremonies, in a best way, point to cultural diversity and human creativity, especially when one considers the wide range of the communities that celebrate it.” 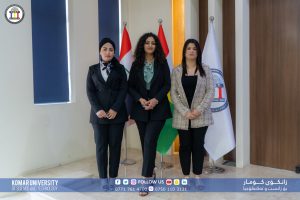